Jojo Moyes, author of Me Before You, joins us today

Jojo Moyes is a British novelist. Her latest book, Me Before You, is, on the one hand, the love story of two people who find themselves in unusual circumstances, but underlying the entire novel is the controversial subject of assisted suicide. A full review of Me Before You can be found here.

I am thrilled that Jojo Moyes has joined us today to answer a few questions.

What prompted you to write this book?

My books are often an amalgam of several ideas that are rattling around in my head - you have to go with the ones that won't go away. I had been thinking about quality of life for some time, given that I had two relatives in care homes at that point, and a friend who was entirely dependent on 24hr care. And then I heard a news story about a young rugby player who had persuaded his parents to take him to Dignitas after he was left quadriplegic, and it wouldn't leave my head. The more I read up about it, the more I realised the issue wasn't clear cut. It also had the "what would I do?" element shot through it, and it became the thing that I had to write about.

How did you research Dignitas?

I read a lot of news stories about it, and there was a long feature in the Guardian newspaper by someone who had been there and followed the whole procedure. I also watched a documentary about its work. I usually like to go and visit places (when I wrote about an aircraft carrier for Ship of Brides, for example, I got permission from the Royal Navy to spend some time aboard one, and when I wrote Horse Dancer, I spent some time at Le Cadre Noir in Saumur) but in this case I felt it would be too crass to intrude.

You have a profound understanding of Will Traynor, his disability and the medical ramifications of his condition? Did you interview other young men with a similar disability?

Having a relative and a friend who were in a similar position to Will meant that a lot of the issues Will faces stemmed from things I'd noticed by spending time with them (other people's reactions to a wheelchair, for example). I also spent a lot of time on chat rooms used by quadriplegics and asked questions - there is an amazing amount of information out there, often put out by the quads themselves. On Youtube, for example, you can witness quadriplegics going through their day - from being lifted out of bed, to having their catheter changed (I wouldn't recommend watching this unless you are feeling quite brave).

The book deals with such a heavy topic, but the mood is consistently lightened by the use of humour. How did you balance the two?

I knew that the book was potentially quite depressing, and that it would require a lot of humour to make it readable. I've also found that there is a lot of black humour employed by quadriplegics and carers. In the end the characters of Will and Lou were so clear in my head that the humour came quite naturally. Which was odd, as I've never really written humour into my books before.

Me Before You is the title of your book. Was this always the title you envisaged or did it change along the way?

No, it was originally called Six Month Contract. But both my agent and my publishers thought this sounded too much like an employment manual, and when my editor finally came up with Me Before You I felt it was right. It's not a book that would benefit from too much explanation beforehand, so I liked the way that title could be read a number of ways.

What advice would you give to emerging writers?

Just keep doing it. I wrote three books before I got one published, and I've written ten since, and I learn something with every book that I write. 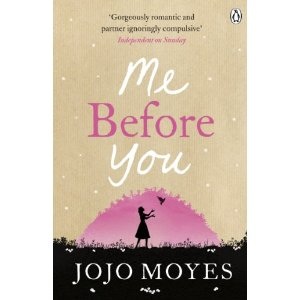 Me Before You is available now.

A Self-Help Guide for Couples

In a couple relationship for almost twenty years, Sarah Napthali is the mother of two teenage boys and a long-term practitioner of Buddhist teachings. She is the author of several...

Melissa Harrison is a freelance writer and photographer whose clients include the Guardian. She was the winner of the John Muir Trust's 'Wild Writing' Award in 2010, and Clay is her debut novel....

A Londoner by birth, Colette Dartford went to university in Bath and made it her home. A scholarship to undertake a doctorate led to a career in health and social...

Rebecca James is the author of the bestselling novel Beautiful Malice and most recently Sweet Damage. She lives in Canberra with her partner and four sons.

Steve Rodgers on his passion for food

Steves play Rays Tempest was shortlisted for the Patrick White Playwrights Award and nominated in the Best New Australian Work category of the Sydney Theatre Awards, following productions at both...

Sophia Whitfield in conversation with our featured authors

Quote of the Day from Mitch Albom

Film Review: The Age of Adaline